In my last article, I created a winged serpent, reminiscent of Aztec mythology. I had parts left over from the conversion, and so I decided to make a lady friend for him. Here are the parts I had before I started that article. 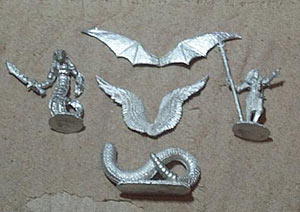 As you may recall, I cut apart several minis, particularly the snakeman. What I didn't show you is the cut I made at the waist of the Warmaiden, as shown here. 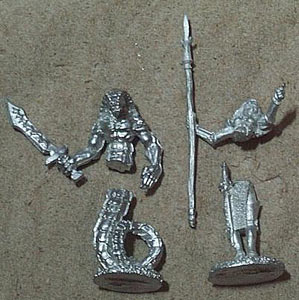 In my test-fits of the human torso to the snake body, I discovered that the two had radically different textures and surfaces. Therefore, I'd need to blend the surfaces before I could get any sort of good transition. In preparation for this, I drilled holes in both the parts, and joined them with about 1cm of paperclip, as shown here. 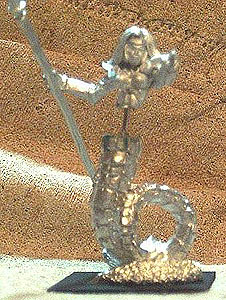 As is normal when I'm trying to take in-progress shots, the camera fought me every step of the way. This is a lovely shot of the background drapery, and includes details of the mini more or less as an afterthought. Are you listening to me, camera? You could be replaced by an infinite number of monkeys, I tell you!
Anyway, my next step was to fill the gap between torso and tail with putty. I deliberately did not bulk it out to the full width of either torso or tail. This was to allow myself some working room when adding texture once this part cured.
Somewhere around this step, I glued the mini to the 1" square base. Normally I don't do this until the mini has been primed, but I was tired of it falling over... and over, and over, and over. 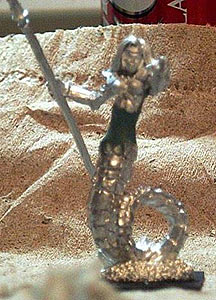 While this was curing, I took the wings and drilled a hole in the joint that would go into the body. I stuck a small length of wire into this hole, so that when I stuck it into the putty in her back it would have a better anchor. 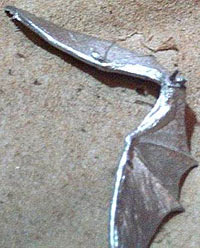 While the middle segment was still curing, I pushed the wings into the soft putty of her middle back. I put the wings there, rather than her shoulders. This is because I thought that it made more sense for her abdominal muscles to be powering the wings. Her biceps can power her arms, but to ask them to do double-duty, epecially when I could sculpt whatever muscles I wanted in her midriff, seemed silly. Here is a picture of this. 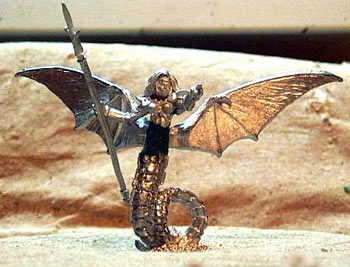 The next step, after propping the mini and waiting for it to cure, was to extend the armor down the side and sculpt on the muscles. Curing involved propping the mini carefully, then bumping it, then repositioning and re-propping it, in a comedy of errors that resulted in a few more grey hairs. Sculpting was comparatively easy in comparison.
Using little pin-head sized balls of putty, I added in the stomach muscles, trying to make a plausible transition from the human musculature to the snake's scales. I extended the armor in two longer flaps down her side, and that meant that I didn't have to deal with any of the side muscles. Yay laziness. Here's a view of the front, after I finished sculpting. Yes, she is actually armored up top and front. You can't really see that in the painted pictures. 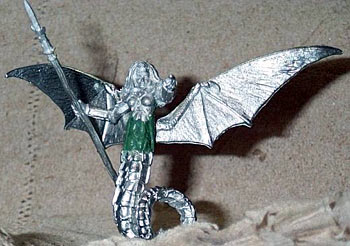 Next, I primed the mini black. In these shots, you can see more clearly the putty-work, and how I tried to transition from texture to another. 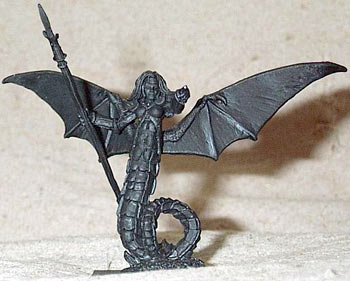 In the shot of the rear, you can see how I replicated the textures of the scales all the way up the back. This would have been much easier, except that I kept squishing it as I was working on the front. Oh well, live and learn, I guess. 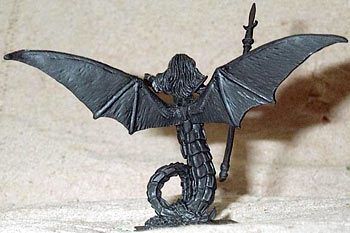 At long last, I painted the miniature. This was spread out over several weeks, and I really don't remember all the steps I took. The back scales and wings were highlighted up through several shades of red, and the skin and underbelly were done using Anne Foerster's recipe for African skin. I believe that consisted of Aged Red Brick mixed with Walnut and a bit of Oiled Leather, highlighted with progressively larger amounts of Oiled Leather. 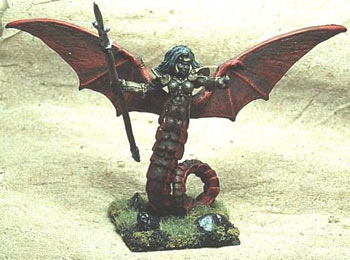 The base is done in the same way as most of my other bases. I put down a layer of black ballast and a few aquarium rocks, followed by a spotty coat of blended turf, followed by little patches of static grass. 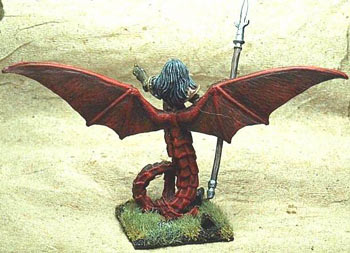 I have no idea what sort of critter she is. "Succubus" is over-used, and most of them are mostly humanoid. Most creatures under the name "Naga" just have the human head on the snake body. "Echidna" from Greek myth didn't have the wings, and she has too few arms and too many arms to be a "Yuan-ti." I believe the last term is actually a copyrighted term in relation too D&D, but I could be wrong. For now, she's a "Winged Serpent Lady", or, when speaking to her, "Yes, Madam, Please Can You Take That Spear Out Of My Liver Now?"