Sometimes ideas just come to you. Sometimes they don't, and you have to leap upon them and wrestle them to the ground, jump up and down on their spine, and then carefully, gently, lovingly bring them back upright so you can mold them as you wish. This was one such idea. In its final form, I think it could wrestle me to the ground, so I'm not going to press my luck now that I've finished it. 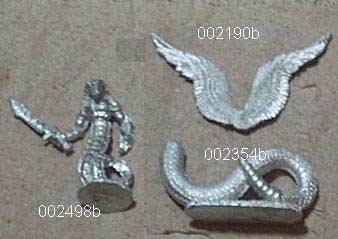 First, I assembled the pieces I was going to use. Here they are, listed for your convenience:
Next, I ground off the knob from the waist of the Medusa body, and carefully cut the snakeman in half at the waist. I used a file for the Medusa, and a jeweler's saw for the snakeman. I saved the bottom of the snakeman for when I make this fellow a lady-friend in a future article. 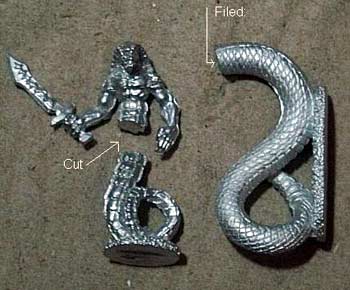 Using a small bead of green stuff, I attached the torso to the body, finagling it so that it was posed the way I wanted it. Be advised that this works much better if you pin the joint first. This is my first time using green stuff, and I didn't know that it had something like an 8-hour cure time. After a few times re-posing where the joint had slumped, I ripped it apart, pinned the waist joint and used super glue, then used green stuff to fill the crack. At this point, I also glued the model to a 1" x 2" sheet-metal rectangle, as I was getting tired of the model falling over. 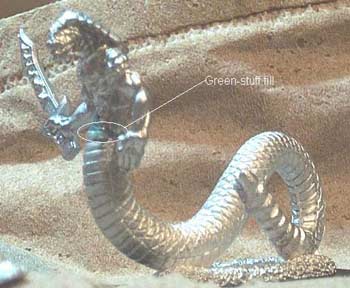 Using a jeweler's saw, I cut the wings apart, as illustrated. I personally dislike how wings are so often a flat one-piece thing that get stuck to the back of something, with no musculo-skeletal structure to support it. This is the first step in rectifying that. 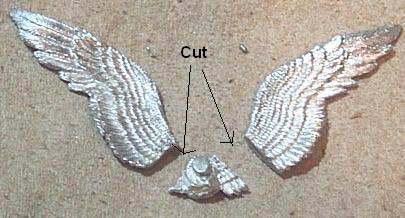 Using the small grinding head on my rotary tool, I cut a channel down each of the snakeman's shoulder blades. By repeated test-fits, I cut the channels so that the wings would mostly fit flat to the snake's back. I then drilled and pinned the wings to the back, using the pin and pinhole placements shown. 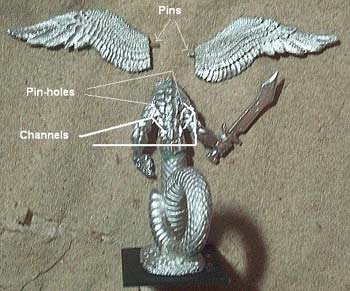 Using green stuff, I filled in the holes and gaps left by the previous steps. It's really not as intimidating as it seems. I was surprised how easy it was to push it into place, then replicate the texture of the scales using a hobby knife. On the back, I filled gaps and tried to not be too terribly different from the scale texture of the snakeman's back. When I did the waist, I made cross-hatch cuts in the putty to replicate the worm-like texture of the main body. 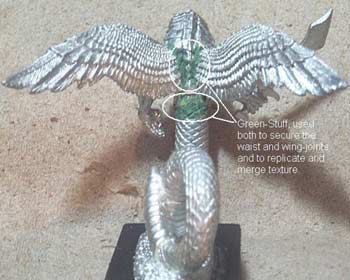 The front was a little more difficult, since I had two very different scale textures to merge. I decided to give the merge area the ribbed texture of the snake's underbelly, but to separate it into two halves, like the snakeman's stomach muscles. The mold-line on the snake body actually helped me with this illusion, and I carried it farther down the underbelly when I painted it. 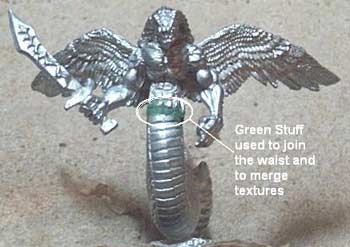 Now for the longer, harder part: Painting. I'm using the names of the Reaper ProPaints I used, for those of you who want to follow along. Most of this was a process of trying to recover from the mistake I'd just made in the previous layer of paint I put down. With that in mind, I'm reasonably happy with how it came out. 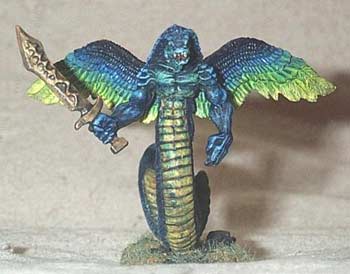 I primed the model black, and base-coated the underbelly with Desert Gold, then highlighted through Sunlight. A very thin wash of Wood Shade Ink followed, to my great dismay. I re-highlighted to yellow, and then brown-lined with Walnut. Notice how I carried the illusion of the ribs being separate down the middle.
The sword is shaded gold metallics with a wash of Black Ink, and the less said about it, the better.
The back and torso was base-coated Breonne Navy Blue, then dry-brushed Dragon Blue and Ice Blue. A wash of Sapphire Blue ink toned down the fuzziness that the dry-brushing produced, and made it less painfully obvious that I'd dry-brushed and didn't highlight each individual scale and sinew. 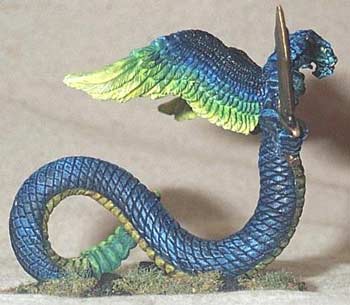 On the wings, I mixed Ink Extender and Breonne Navy Blue about 3:1, and flooded the top few rows of feathers, using an old size 1 brush. I did the same with Dragon Blue, thinned the same way, on the next two rows. While it was still wet, I blended the two colors together, using a 000-size brush. I repeated the process with Emerald, then Sunlight, and then just a little bit of Dragon White at the wing-tips. 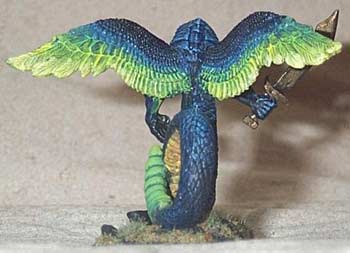 The rattle was harder to figure out, but eventually, I base-coated it with Elven Green, dry-brushed it up through yellow, then washed it with Emerald. After that, I highlighted it with Sunlight again. 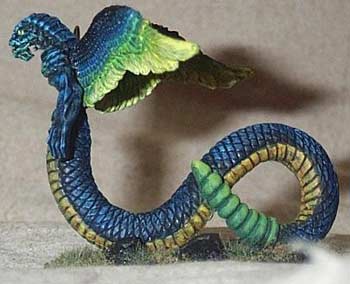 The base is a piece of sheet metal, one inch wide by two inches long. This is in case anyone really wants the Feathered Serpent of the Aztecs descending on their Warlord game. It's the right size to use in place of a cavalry model. 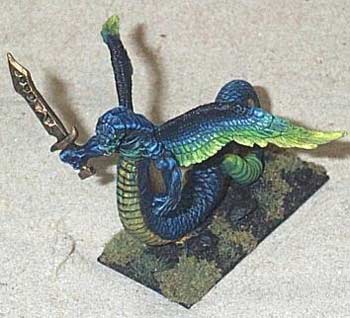 To build up the base, I flooded it with super glue, being very careful to not get any on the painted model itself. I then sprinkled black aquarium rocks, and added Woodland Scenics fine black ballast. This gave me a nice foundation for the subsequent parts, like turf and grass. 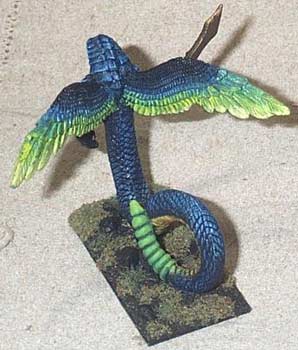 For the next step, I added super glue to the base in what I can best describe as a pattern similar to a Holstein cowhide. I then sprinkled Woodland Scenics Blended Turf on that glue, shaking off the excess. When that was done, I put just a droplet of super glue in the middle of each section of Blended Turf, as well as where too much black was showing through. I applied Woodland Scenics static grass.
Behold, I set before you now a mini worthy of the fear given him by the other minis on the shelf. 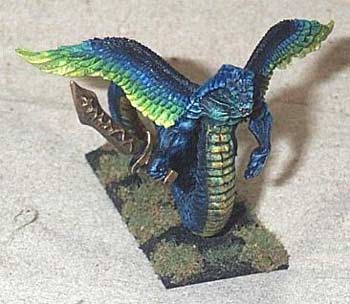 I am greatly indebted to the one who helped me brainstorm the design of the mini, and the many who helped me with the color scheme, selflessly sending me picture after picture of Quetzalcoatl and other Coatls. Thank you.