Elise and the Phase Cat: Mounting an Unmounted Figure


I continually see requests on the Reapermini forums for mounted and unmounted versions of a figure. When these are unavailable, it is still possible to get a mounted version of your hero. These instructions should work for most figures with decently separated legs or without too much material between their legs. Figures wearing skirts or large trousers will require a lot more cutting and putty work, loincloths or tabards will probably require removal and resculpting. Fortunately, such things are fairly simply accomplished.

For this example, I'll use Elise the Witch and the Phase Cat, both from Dark Heaven Legends. The phase cat is good because it has a nice clear back, tentacles to hold on to, and the opportunity to make a saddle. Elise is mostly in the stance I need already. Though the pumpkin will be hard to remove, it shoudn't be a problem with a steady hand and a jeweler's saw. Anyway, I find I do a lot of things merely because I can.
Here are the parts. It was about at this point when I realized that I didn't have any unbroken blades for my jeweler's saw, by the way.

Lacking my saw, here are the clippers I used. I love these things and use them on pretty much every model I work on. In this picture, you can see I've removed the broccoli base, and am starting in on removing the pumpkin itself. The basic procedure here was to clip off everything around the edge that I could reach, then cut off the leftover plug of material on the bottom. When doing this, as always, you need to make allowance for the fact that the clippers will distort the metal somewhat as you squeeze. A delicate touch is required, especially when you're clipping adjacent to fine details. 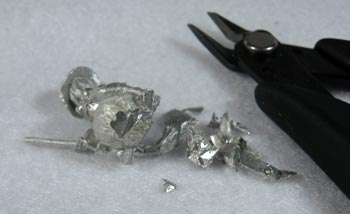 Here I've made a start at removing the pumpkin. Here, it's a matter of cutting out wedges of material wherever you can get purchase with the clippers without damaging anything you want to keep. I like to do as much bulk removal as I can in the middle areas, so that I have smaller cuts I need to make when I'm close to all that skin on the legs. 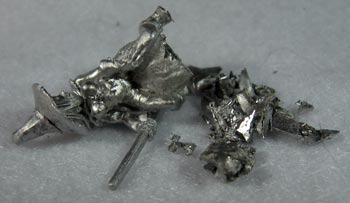 Here's even more progress removing the pumpkin. I'd say I'd been at it for about 15 minutes so far. You can see here what I was talking about - removal from the middle first where I can make big cuts without damaging the rest of the model, saving the fine work for when I have less metal to remove. When you do this, don't worry too much about the legs themselves moving; you're going to have to bend them back into place when you're fitting the model to the mount anyway. 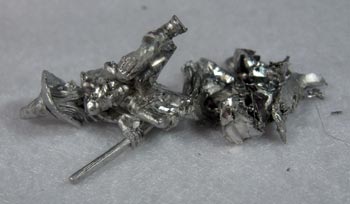 Here is Elise with all of the pumpkin removed. You can see how the legs were splayed a bit by the cutting - that'll be fixed later on. Pewter is very forgiving up to a point, so you can make minor bends fairly easily. If you end up breaking the legs when you bend, that means you bent it too much or too fast. No worries even so; you can fix that with putty and glue, or hide it with paint later. Yes, the second shot is blatent fan-service. 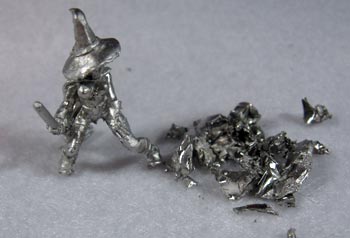 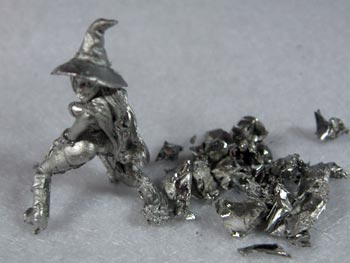 That broom is problematic, having bent several times and become rather kinked during pumpkin removal. It'll probably get removed, but let's do some test fits before deciding. 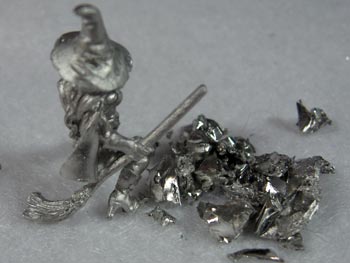 Here are some test-fit shots of Elise on the phase cat. I'm looking for the general look of the pose, whether I need to remove more material, and how much gap-filling I'll need to do with the saddle I plan to make out of putty. From here, it looks like the legs need to be bent inwards a little, the feet brought up, and some extra slag removed from between her legs. Also, it's not clear at this point how that broom is going to fit with the tentacles I have to put on the cat - it's really getting in the way. 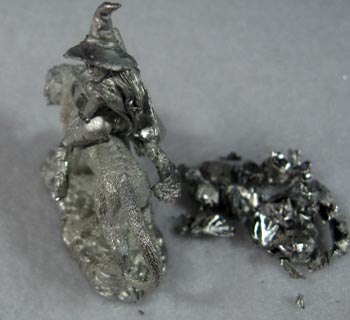 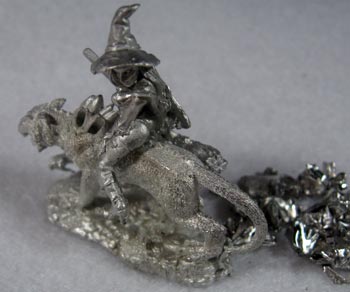 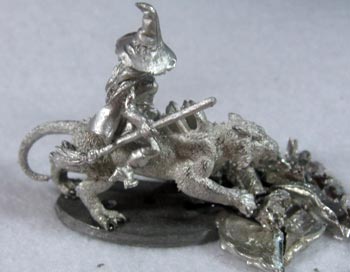 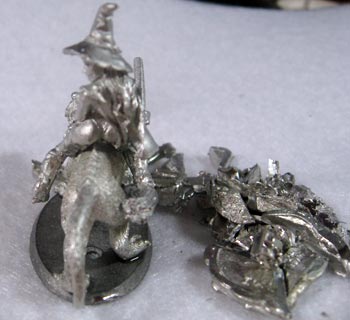 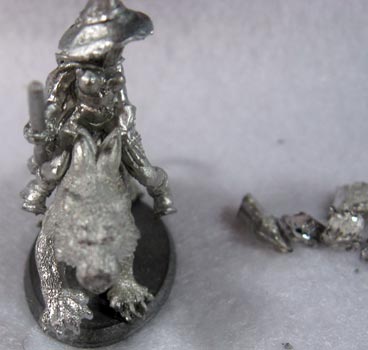 A few pictures ago, I replaced the cat's broccoli base with a simple oval base. Here I also cut off a couple of the spine ridges so I'd have a better surface to put the saddle. 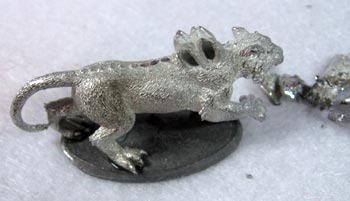 Here I've taken a dremel to the inner surface where the pumpkin used to be. I smoothed out the edges and removed all the extra jags and burrs. Yes, this shot is also fan-service -- unabashedly so. 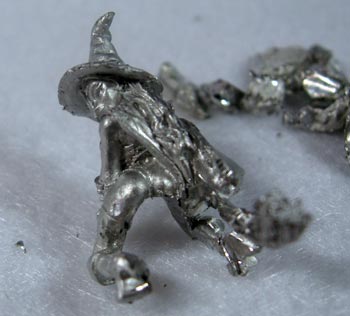 In these pictures, I've bent her legs so that her feet are higher up and therefore fit the mount better. I've also squeezed them in against the cat's sides so that they rest more flush with the animal. 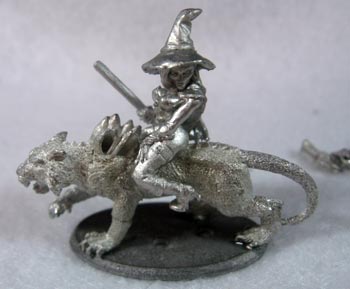 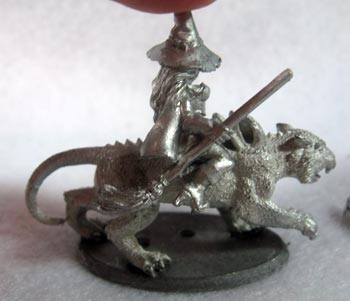 Ok, that broom needs to come off. I removed it, using the process described here.
Now that her hand is open, she can grasp one of the tentacles like a set of reins. 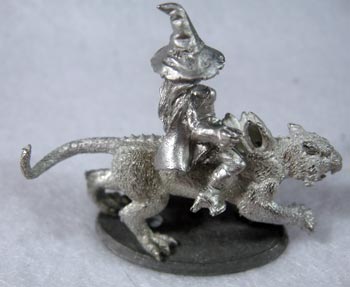 Now that the basic fit and pose is established, it's time to start test-fitting the tentacles. Somehow I have to fit four of them on the cat and have it look natural. Here's a test fit of the rear set. It looks like I'll have to carefully pre-bend and pre-fit the tentacle on the left into Elise's hand before gluing it down. 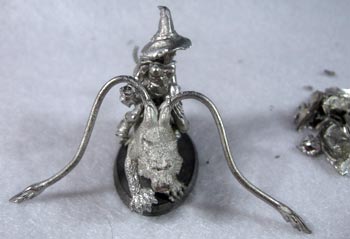 Here's the tentacle threaded through her hand. Notice the pile of slag metal I've cut off both figures dirung the course of the article. 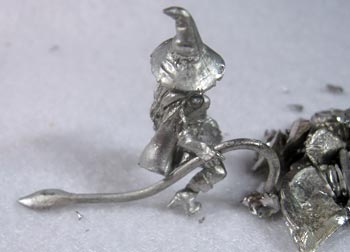 Before I glue anything down, I need to make a saddle - this will serve two purposes. The first purpose served is that of gap-filling. This is why I wasn't too concerned about an exact fit of the rider to the cat - the putty saddle will take care of most of that. The second purpose is so that she'll have a saddle. 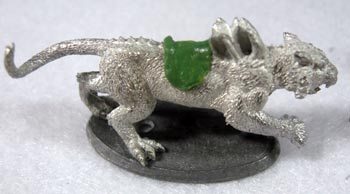 Here's Elise on the saddle. At this point I need to start gluing things down, because I'll wreck the saddle if I squish it round too much by moving the figure. 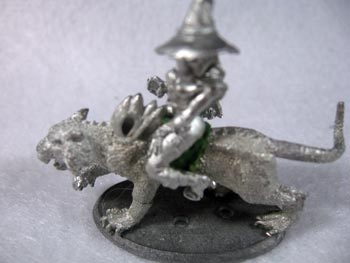 With Elise in place, I've bent the tentacle so that it'll both fit in its slot and through her hand. 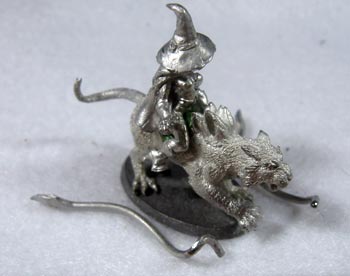 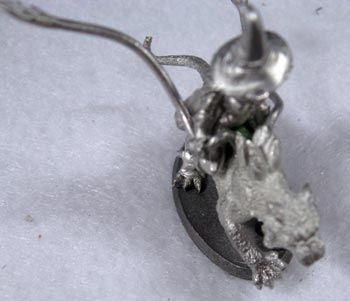 After that, the other rear tentacle was trivial to install. 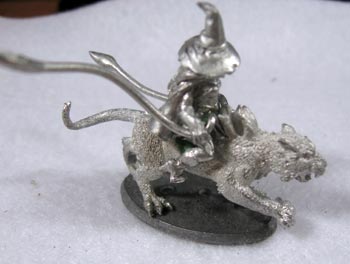 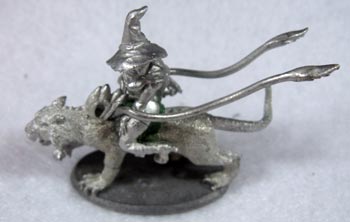 The front tentacles are now glued in and ready to be posed: 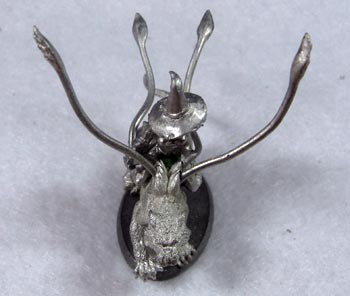 And here we have the completed figure, ready to paint: 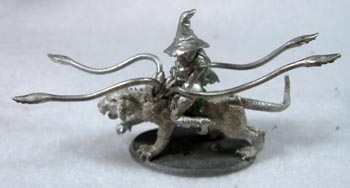 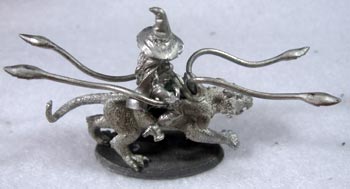 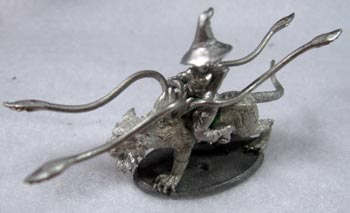 And here she is painted and ready to terrorize your players.
Wait...you DID paint this as an NPC, right? You didn't? This is your character? Man, I want your GM. 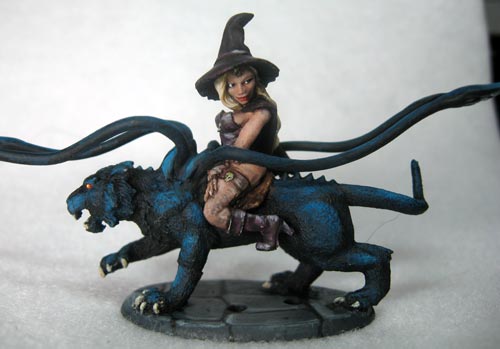