Of Dire Rats and Slithy Toves


"'Twas brillig, and the slithy toves
did gyre and gimble in the wabe.
All mimsy were the borogoves,
and the mome raths outgrabe."
-Lewis Carroll
We've all been enthralled, bemused, or vaguely annoyed by this famous poem in "Alice Through the Looking Glass", the sequel to "Alice In Wonderland". As is revealed later on in Looking Glass, a slithy tove resembles a badger, has a corkscrew-like snout, and its name is a contraction of "lithe" and "slimy". Sir John Tenniel was kind enough to illustrate the original editions, and here is a colorization of his concept of a Slithy Tove:

I had occasion to run a roleplying campaign set in Wonderland some months ago, and one of the encounters was, you guessed it, a burrowing swarm of Toves. I therefore needed minis of Toves. Fortunately, the conversion is simple, requiring only the following:


I started out with the Dire Rats, 16 of them in fact.

Using the nail clippers, I removed all their ears at the head.

Next, I had to form the snout. I made a little ball of putty and cut it into sections. Here's a picture of about the size I used. Yes, I know it looks like a hamster poop. Let's move past that, shall we?

With some negotiation, the putty was folded over the nose of each critter, so that it both covered up to about the eyes and the entire muzzle but not the mouth, and that it stuck to the model. This was probably the most fiddly part of the whole project.

The snouts were all twirled about to create a corkscrew effect. Unfortunately, this image was lost, but you can see the final effect in this group of painted Toves:

The conversion took about two hours total for all 16 Toves. Had the putty cooperated, it would have taken about 20 minutes. In any case, I sprung them on my players, and they soon learned that the best way to deal with Slithy Toves is from a distance, and with superior firepower. My work here is accomplished. 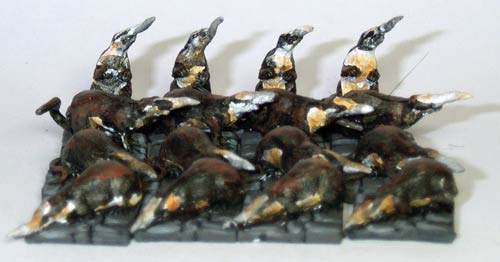