I was poking through my box of bits, and playing with how things fit together. Somehow, these parts all just cried out to be thrown at one another. The result is a custom CAV I call the Cicada, after the insectoid theme that Borsig-Spline seems to have going. 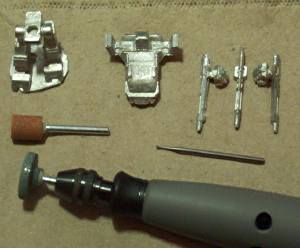 
The first thing I had to do is to close the missile packs on the Spider chassis. It looked really cool with just the Spider chassis sitting on the Panther legs, but if all I have to do is one drop of glue, this article is likely to be rather short. Thus, I decided to add arms. The missile packs in their open position were in the way.
I tried to close the missile packs just by bending them. I failed to consider the little sculpted hydraulic line inside the cavities. When I tried to bend them, they buckled, and the pods did not fit closed. 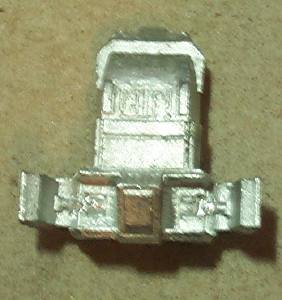 With the ball-grinder Dremel bit, I ground out a trench on the fold line, so that I would be able to fold the missile packs closed with no excess metal preventing me. Here you see the final closed results. Notice that slight buckling right by the central missile pack? We'll deal with that later. 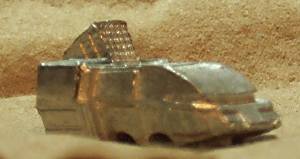 Now to attach the arms: There is no hole in the side of the Spider chassis into which the arm-pegs can fit, so I had to drill my own. I selected a drill bit of the same diameter as the peg by which the arm would attach. Pewter is soft enough that you can just use a normal drill bit designed for wood. If you were drilling into steel, you'd need a drill bit made for the purpose, and you'd have to keep the tip lubricated, less the drill bit start to smoke and lose its tempering. Trust me on this. Drilling into Pewter is much simpler and safer.
With the drill bit selected, I first marked the place for the hole by grinding into it with the ball-grinder bit. The reason I did this was because it is much easier to control the drill bit when it has a pre-defined hole. In this picture, you can see the drill bit pointing right at that pre-defined hole. 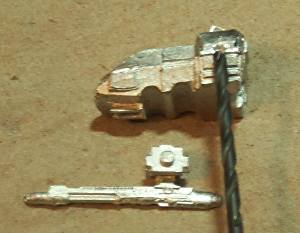 With the holes drilled for the arms, I then glued the arms into place. There's nothing really special here, but hey, you wouldn't want an armless CAV, would you? 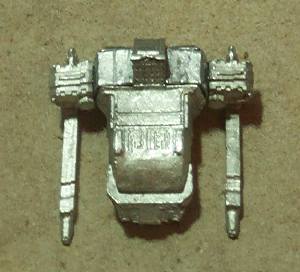 Here I ran into a bit of a quandary. My original design called for a tri-gun setup, as pictured in the top row of pictures. To do this, I would have to grind the central missile pack completely off. As this is not a trivial undertaking, I decided to take pictures of the parts and play with them in MS Paint. The bottom row of pictures is what I actually photographed. The top row, after some creative cutting and pasting, shows the tri-gun approach. After much soul-searching and getting advice from whoever happened to be online at the time, I decided to not add the third gun. Note that the head and legs are not permanently glued in this picture. I just applied enough to keep them together for the pictures, and broke them apart again as soon as I had the photos. 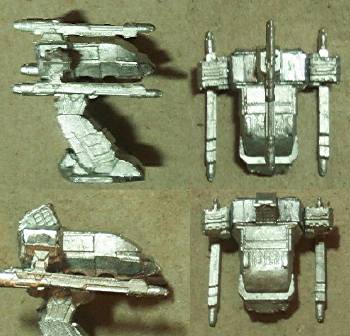 Remember that buckling I pointed out from when I closed the two missile pods? Here's where I take care of it. I stuck the rubber wheel in the Dremel, and prepared to even it out, as shown here. I selected the rubber wheel instead of the stone wheel because the rubber wheel will leave a much smoother surface on the top of the CAV, and if I mess up, it's much less likely to leave a whole series of scratches down the cockpit and across my thumb. Again, trust me on this. Really. 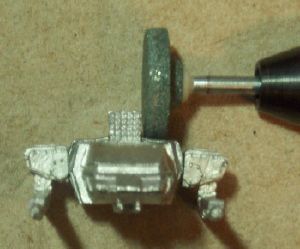 In the obligatory show of resistance from the camera, I now have a blurred shot of how I filled the hole in the waist, and the cavity at the back of the Spider chassis, both with putty. When I joined the two peaces together, I stuck a 1cm length of paper-clip into the putty on the legs. When I placed the chassis on top of the legs, I made sure that the paper clip protruded up into the putty in the chassis, so as to reinforce the joint. I then superglued the joint. 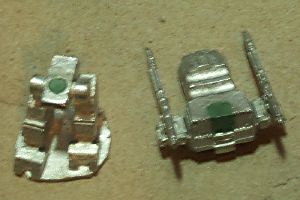 Here we have the finished model. As this is a conversion, I cannot suggest stats for the model in this article, but I will likely post the proposed datacard on either the Reaper forums or Mil-net shortly after the article is published. All it needs now is paint, and it can take down aircraft with its cousins, the Sabretooth and the Vanquisher CAVs. 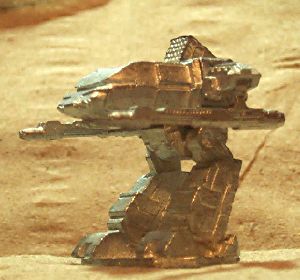 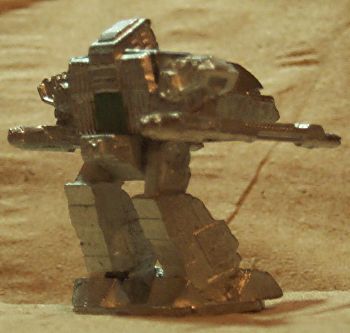 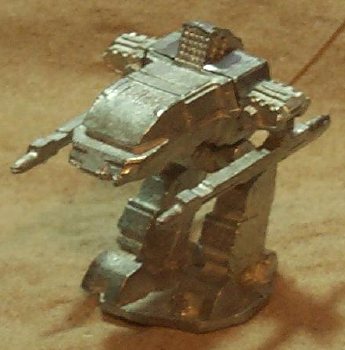