When it comes to miniature painting, the eyes have it. Few details draw as much attention from admirers than those of well-painted eyes. Unfortunately, many painters rue the thought of painting eyes. One slip of the brush and a glaring hulk of a warrior is reduced to a cross-eyed caricature. No fun, especially after all those hours shading and highlighting his bulging muscles to gleaming Mr. Universe perfection.
Why then take this risk? Why not start with the eyes instead of waiting until the end as many painting guides recommend? For years, many artists have managed to produce excellent results by perfecting the eyes first, and you can, too. Here's how.

Step 1: Don't Fire Until You See the Whites of Their Eyes...

Immediately after the mini is primed, start by painting in the whites of the eyes using an off-white color like Reaper's White Leather. Try not to use a straight white like Dragon White. Straight white can sometimes be too glaring for eyes, and besides, you'll want to save it for the brightest highlights on your mini's skin tones and armor. Whatever color you choose, don't worry about staying within the lines at this time. Just go ahead and slather away, being sure to cover the eye, the eyelids, and even the cheek and brow.

Step 2: Crossing the Ts and Dotting the Eyes...

Once the whites are dried, you're ready to tackle the hardest part - dotting the eyes. But don't fear. If you make a mistake here, you only have one step to do over, not an entire face or mini. So relax. This is going to be easy.
Begin by choosing a dark color like Dragon Black or Walnut. For small minis, you'll paint both the iris and the pupil as one dot, so choosing a dark color will work to create the proper illusion. For larger minis or light-colored eyes, you may need to paint both parts of the eye separately, but that requires a pretty steady hand and loads of practice. For now, let's just start with a simple dot.
Holding the brush between the thumb and forefinger of your dominant hand, place the heel of this hand against the heel of your off-hand. If the size of the mini in your off-hand permits, wrap your lower fingers around the base of your brush hand as opposed to curling them into a fist. This will help to steady both hands. Otherwise, use as many fingers as necessary to hold the mini secure. Just be sure you're able to easily extend the thumb and forefinger of your brush hand for this is how you will achieve the dot.
Carefully line up the tip of the brush with the top center of the eye. Generally, you don't want the dot dead center, but instead just slightly higher towards the upper eyelid, leaving a wider crescent of white beneath. It's even all right if the apex of the dot overlaps a bit of the sculpted eyelid. If you take a look at a photo of your friends or family, you'll notice most people's upper lids partially overlap their irises. 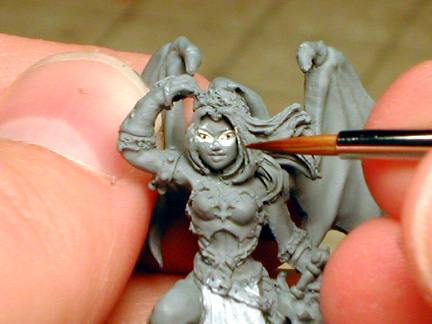 Once satisfied with your brush alignment, slowly extend your thumb and forefinger until the tip of your brush pushes gently against the eye. The bristles should yield slightly, forming a nice, round dot. Now just as carefully, withdraw. Repeat this step with the other eye.
If aligned properly, the mini should now look as though it's staring at you. If it doesn't, if it's cross-eyed or has a "lazy eye", don't panic. You can fix it. Likewise, if one dot is larger than the other, it's not the end of the world. You have a couple options for correcting your mistake.
The first option is simply to start over on either eye or both eyes. After all, you're only one step from the very first step. Simply paint over the dot or dots with whatever color you selected for the whites of your eyes and try again.
The other option for correcting a mistake is to reshape either or both dots with a bit of whatever color you used on the whites. This second option is often best for mis-sized dots, but can be also be used to correct alignment. By shaving a bit off of one or both dots, you may be able to achieve perfect alignment, especially if the dots are of sufficient size and relatively well placed to begin with. Whichever option you choose, remember to work slowly. Speed or impatience will simply cause you more grief.

With the eyes dotted, it's now time give them some definition. You'll do this in two steps by either black- or brown-lining the lids to achieve a distinct "kohl-eyed" look, much like the eyes in drawings of ancient Egyptian women. Your choice of black or brown will depend upon the flesh tone you select for the figure. Use a brown like Reaper Walnut for lighter flesh tones and use Dragon Black for darker skin.
Hold the mini and apply the paint by extending and retracting your thumb and forefinger as in the prior step. However, this time, instead of simply dotting the eye, you'll be drawing the bristles across the face of the mini in a curved line. Your aim here will be to either outline the contours of the sculpted eyelids or else draw an oval around the eye, creating a smooth almond sliver out of the whites. 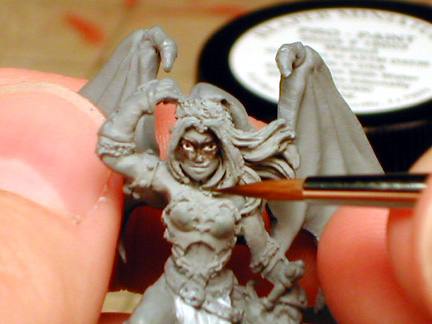 Don't worry about the width or evenness of the outside edge of your line. You need only concentrate on keeping the edge closest to the eye smooth and even. Go ahead and smear the cheek and brow. You'll be painting over those surfaces with your flesh tone in just a moment, so it doesn't matter. The most important thing to bear in mind here is that you want to err on the outside of the line, not the inside. So, try painting away from the eye as opposed to toward it with short, steady strokes. To do this, it's best if you begin your stroke on the inner most edge and paint out.
When finished, the whites of the eyes should be sharply defined by dark, even edges that form an approximately almond-shaped wedge or else which follow the contours of the sculpt. Don't worry if your upper edge touches or partially covers the dot of your pupils. In most cases, this is desirable for reasons explained above. However, if one edge dips too far into the eye or one eye is too large or small, go ahead and touch it up with whatever color you've selected for your whites and then repaint the edge. Miniature painting is all about illusion - making everyone think you're flawless, when, in fact, you're not.

With the above step complete, it's now time for the second step of defining the eyes: trimming your black - or brown - line.

Using exactly the same technique described above, apply your base flesh tone around the eyes, leaving a very thin line of black or brown around them. Try to make this line as thin as possible, for if it's too thick, your mini will turn out looking like a raccoon. Again, this will be easier if you place the brush nearest to your inside edge and paint away from the eye as opposed to towards it. Any slips you make should smudge the cheek or brow, which is exactly where you want the paint to be anyway.
In the event you do make a mistake, simply paint over it as in the previous steps. Remember, you've only just begun this miniature. You're free to start over again and again, being as sloppy as you want to be. There's simply nothing you can mar. So, paint away with abandon until those eyes are bold and beautiful.

While the above steps may seem complicated, you'll soon see that with a bit of practice you'll be painting stunning eyes in no time. In fact, once you're proficient enough with steadying your hands, you'll find yourself challenged to add more details, like painting separate pupils and irises, adding a bit of pink to the corners, or placing a dot of pure white as a reflection on each eye. And if that doesn't bring a gleam of pride to your own eye, nothing will.
Happy painting.


(Just for the record, you'll be interested to note that the examples for this article took me a good three attempts. So, again - be patient. It'll pay off.)