by Derek Schubert
Like the dire wolf, this spider has a furry texture and a color scheme inspired by a real spider (a wolf spider, in fact). Again, you can take artistic license with the colors and patterns, since we don't have ten-foot-wide spiders in our world!


When I cleaned the spider, I moved some of the legs for a more dynamic pose. Alternating legs are off the ground, as if the spider were walking toward its next victim. You could make two spiders from the same casting look like different figures, just by posing the legs differently. 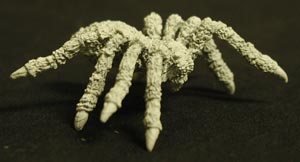 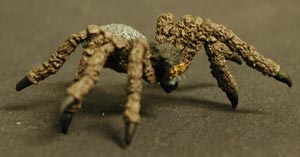 The front half of the body is Walnut, the abdomen Ash Gray, the legs Volcano Brown, and chelicerae (orange things at the mouth) Ruddy Flesh. Since this figure has no base, I hold it carefully by the claws, which I don't paint until the end, but the photographs show them with a base coat of Walnut. 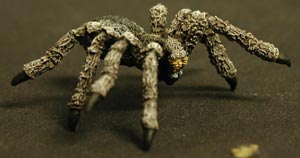 A wash of Dragon Black defines a marking on the abdomen. Washes of Walnut at the joints articulate the legs. The chelicerae are washed with Chestnut Brown. 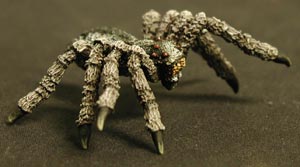 I pull out the highlights on the body by drybrushing with Volcano Brown and Stone Gray, on the abdomen with Stone Gray and Dove Gray, and on the legs with Dove Gray. Drybrushed highlights of Ruddy Flesh and Dragon White round out the chelicerae. 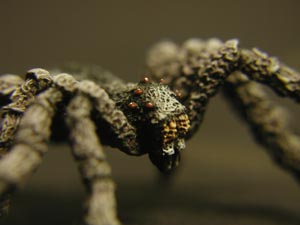 A glaze of Imperial Purple on the body, abdomen, and legs makes the spider look even creepier. The red eyes are Maroon, highlighted with Dragon Red and a tiny spot of Dragon White. The claws have a base coat of Walnut and layered highlights of Walnut mixed with Hawkwood and Dragon White.