by Derek Schubert
Just as the Onastaa the Sorceress is a showcase for cloth, Brigetteof the Blade is a showcase for metal. Painting metals uses most of the same concepts as cloth, but metallic paints look best if built up from a dark base coat. Since we are dealing with fantasy miniatures, the metal doesn't have to be silver or gold. You can have green metal or purple metal; some figures just call out for bizarre combinations of metallic colors. Here, Brigette gets a suit of coppery-red armor with silver trim and complementary blue accents, including a magical frost sword.

I prime the figure white, even though I intend to paint most of it black or dark brown. I would rather paint black over white primer than apply several coats of pale skin over black primer, possibly obscuring the sculpted detail. 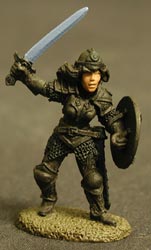 I cover most of the figure with either Walnut or Dragon Black. Her skin has a dark base color -- Caucasian mixed with Woodland Brown -- so I won't shade much but will build up several layers of highlights. (The Brand the Barbarian figure example shows another approach to painting skin.) Her sword has a blade like ice, starting with Ice Blue mixed with Night Sky. The base of wintry brown grass is a mix of Volcano Brown and Troll Flesh.

This step is different from the third steps of the other figures. Since I started with the darkest colors as a base, most of the figure needs no shading but twice as many highlights. The chainmail gets the first highlight, drybrushed Steel Plate. The sword hilt is also this color. The first highlight on the copper armor is a mix of Walnut, Chestnut Brown, and Red Metallic; the next layer is Chestnut Brown, Red Metallic, and Fire Glow. I start on the hair, gloves, and shield interior with Volcano Brown; you can see that I am starting to make the shield look like wood planks. I wash the jawline and mouth with Walnut and fill the eyes with this color. The scabbard gets a highlight of Night Sky and the sword blade gets Ice Blue. The first drybrushed highlight on the base is Woodland Brown plus Hawkwood.

I finish the chainmail and hilt with Truesilver and the coppery armor with Red Metallic, Fire Glow, and Truesilver. Think of silver as the white of metals; you can add it to other metallic colors to make highlights. Highlights on the sword go from Ice Blue to Dragon White. I pick out the wood grain of the shield with Woodland Brown and Stone Gray. The belt and the shield straps get highlights of Woodland Brown plus Caucasian. Layers of highlights on the gloves go from Volcano Brown to Hill Giant Brown with some Dragon White (a relatively high highlight for leather); the hair, from Volcano Brown to Chestnut Brown and some Dragon White. The skin is Caucasian with Dragon White. The base gets a highlight of Hawkwood mixed with Dragon White.

The trim of the armor is Truesilver. Icy accents appear in the pale blue gems (Night Sky, Ice Blue, Dragon White) in the sword pommel, helmet, and breastplate, as well as a blue border to the red-brown face of the shield. I also glaze the sword blade with Truesilver, for a coating of silver flecks that you would probably only notice up close. This swordswoman doesn't wear makeup, but I still give her a little glaze of Chestnut Brown at the cheeks and lips. I paint her eyes just as I described for the sorceress. 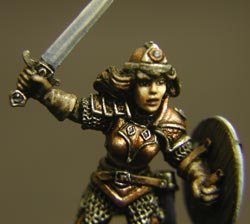